Heatherwick Studio's London based rolling bridge is an 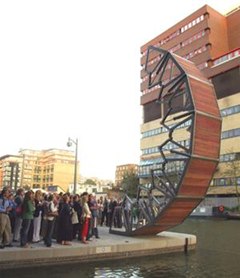 engineering marvel. Lots of fun, and immensely satisfying to watch (via YouTube, assuming you can't see it in person).

"Rather than a conventional opening bridge mechanism, consisting of asingle rigid element that lifts to let boats pass, the Rolling Bridgegets out of the way by curling up until its two ends touch. While inits horizontal position, the bridge is a normal, inconspicuous steeland timber footbridge; fully open, it forms a circle on one bank of thewater that bears little resemblance to its former self.

Twelve metres long, the bridge is made in eight steel and timbersections, and is made to curl by hydraulic rams set into the handrailbetween each section."

Awesome. Check it out:

Really cool, but I would not want to wait for this bridge before work.